ASUS is one of the companies that has been working the hardest on creating automatic overclocking functions for their motherboards and with Intel’s launch of Sandy Bridge it has raised the bar considerably. According to sources to NordicHardware the technology will turn make the most regular of Joes capable of reaching impressive results.

We’ve heard this before and without having tested ASUS’ new automatic overclocking function we can’t draw any real conclusions, but from the looks of it everyday overclocking may be a thing of the past with the next generation processor platforms.

ASUS Dual Intelligent Processors 2 is the name of the concept that builds on two separate microprocessors that are used to monitor and control power consumption of the components of the motherboard. ASUS has used its EPU and TPU circuits before, but its Auto Tuning technology has gone through a transformation and been upgraded substantially to meet the potential of Intel’s unlocked Sandy Bridge K processors and bring mighty overclocks through a simple push of a button. 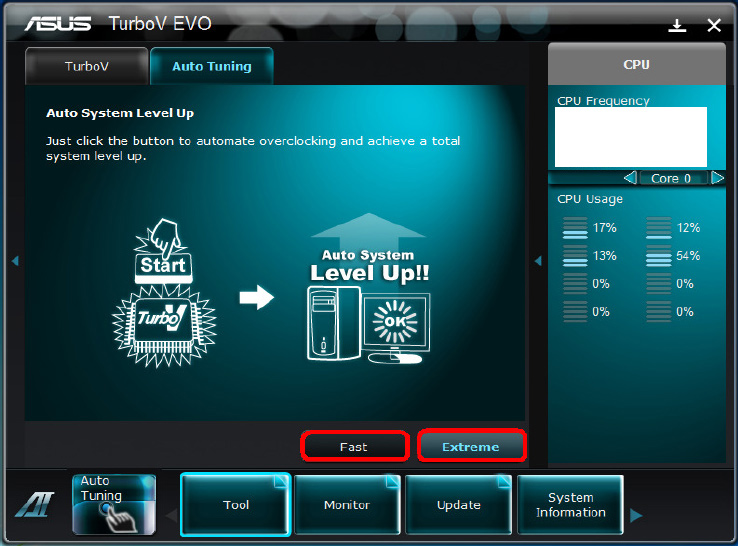 ASUS supplies two different automatic overclocking functions – Fast and Extreme – that are found in the EFI BIOS and the software TurboV EVO. If we focus on Extreme Tuning that is the most interesting to us, ASUS had the following to say;

Extreme Tuning is the advanced version of Fast Tuning, where the system will overclock the CPU via Fast Tuning, then continue to tune system performance till the top performance is reached. As this also goes into the step by step self tuning process, it will try to overclock the system till the OS crash or CPU begins to throttle, hence one OS crash event may be expected before the completion of the auto tuning process.

In short, the TPU processor will act as the overclocker and go through similar routines as the regular user. Increase clock frequencies, voltages and tighten up latencies to finally run some automatic stability tests. It all starts with a simple push of a button and after that the ”overclocker” can sit back and wait for the 5-10 minutes the Extreme test takes. 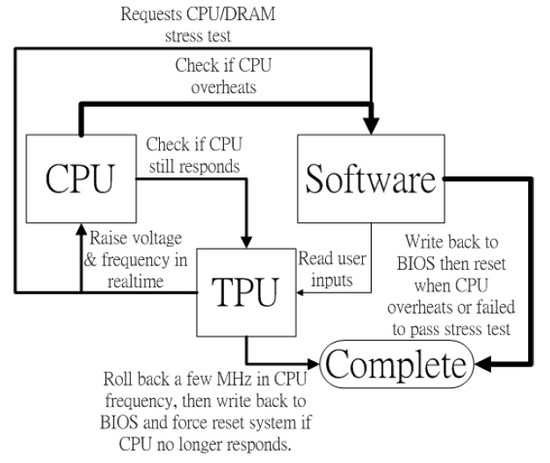 Extreme Tuning brings out the most of your hardware

The application of Extreme Tuning is unique in the sense that it allows the hardware – in the case motherboard and CPU – control the final result. Earlier automatic overclocking functions have relied on software and simply calculated what the components of the system should be capable of doing, which has often turned out very conservative. Wit all of the parameters Extreme Tuning takes into consideration the automatic overclocking will not only be affected by the unique properties of every CPU but also cooling and other external factors.

According to the information NordicHardware has taken part of the technology looks to work better than hoped and even if said we can’t draw any real conclusions before having tested it – which will happen soon – we have witnessed some early result.

With a sturdy air cooler and one of Intel’s powerful unlocked Sandy Bridge processors – which should limit the percentage overclocking potential – it has in early tests reach frequency improvements of 44%. Perharps even more interesting, the results Extreme Tuning accomplished was on the same level as those an experienced overclocker could do in the same timeframe.

Manual overclocking only for the really addicted?

There is no doubt that a good overclocker will still be able to push his system higher than ASUS’ advanced TPU can, but if we consider the short time needed, and the relatively high minimal overclock that can be established, it is hard to see how the regular users will find it worthwhile to do it the old fashion way. A bathroom break after completing the build and Extreme Tuning has made the most of your construction.

This is of course good news for regular users. hardcore enthusiasts – like our team members of NHOC – will of course keep pushing for the limits, but in the future also less experienced users will be able to maximize performance with ease. Exactly which of ASUS’ models that will support DIP2 and the new advanced overclocking technology isn’t entirely certain. What we do know however is that every model – except the LE version – in the ASUS P8P67 series supports this technology. The top model of the ROG program, ASUS Rampage IV Extreme, will not support it but instead focus on manual overclocking and the truly extreme users.

We really look forward to digging deeper into ASUS’ automatic overclocking technolgoy and hopes to see similar solutions from other companies.

I found to a great degree your remarks profitable so far Thanks. I discovered extremely helpful so far Thanks