AMD has released quite a lot of Fusion APUs, but one market it hasn’t really covered yet is tablets. It has the Desna APU, which is basically Ontario with some more aggressive power saving in the northbridge and memory controller. With Hondo it will lower energy consumption and use a tailored chipset.

Tablets broke through quite fast and AMD was not ready, but came up with the quick fix called Desna. It now has a new platform called Brazos-T on the way, optimized for tablets. We don’t mean Wichita, a 28nm APU with 3W TDP, but Hondo that is something in between. 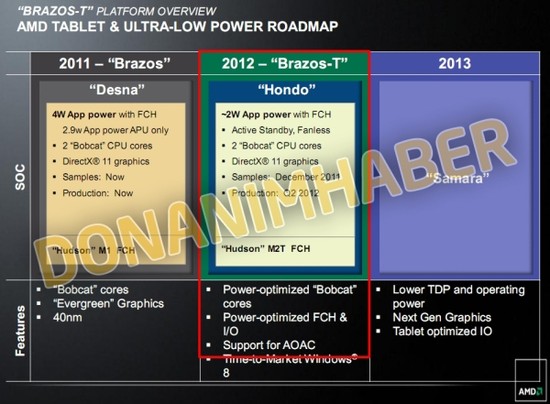 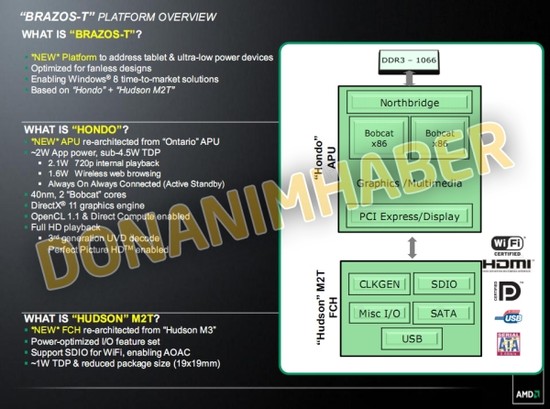 Hondo will bring more or less performance identical to Desna, but lower energy consumption. Hond like Desna will be based on Ontario and 40nm technology, but will have a redesigned core with a larger focus on less power. Besides that AMD has removed unnecessary functions not needed in tablets, like PCI Express. 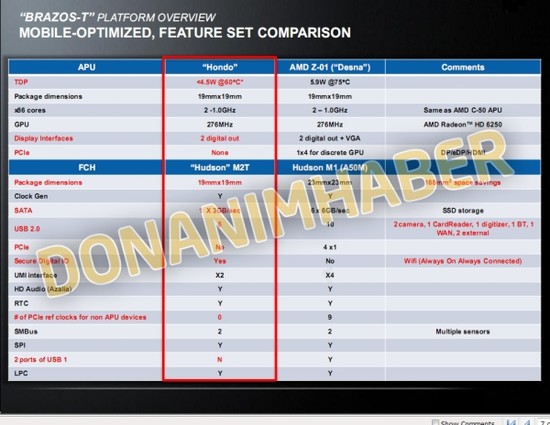 In terms of the chipset this is where AMD has made the biggest changes, hoping to scale down to ~1W TDP. The chipset is based on Hudson M3 and will bring only what is needed in a tablet. We see SATA 3 Gb/s, eight USB 2.0 ports where most will be used internally for cameras, card readers and alike. ALso the PCI Express support is gone, and it will have integrated WiFi.

Hondo and Brazos-T will not bring any real news, but is designed to bring a halved TDP and stripped down southbridge. On the whole it is a platform that could turn the tide for AMD on this particular market and result in more AMD tablet designs.