The biggest change for future products from AMD will actually come on the server side. It scrapped Komodo in favor of Vishera, started a domino effect that will be noticed best in the server segment.

AMD Komodo was supposed to offer 10 cores with fully integrated PCI Express and triple channel memory. With that AMD had changed the socket for both retail and servers, but we already knew that Komodo was history for AMD and that it had been replace by Vishera with 8 cores and the new Piledriver architecture. Sepang would have been a 10-core server processor with Piledriver to replace the current Valencia with 8 Bulldozer cores. Terramer woul in turn be based on two Komodo cores and make up a processor with 20 cores, which would replace the current Interlagos with 16 cores. 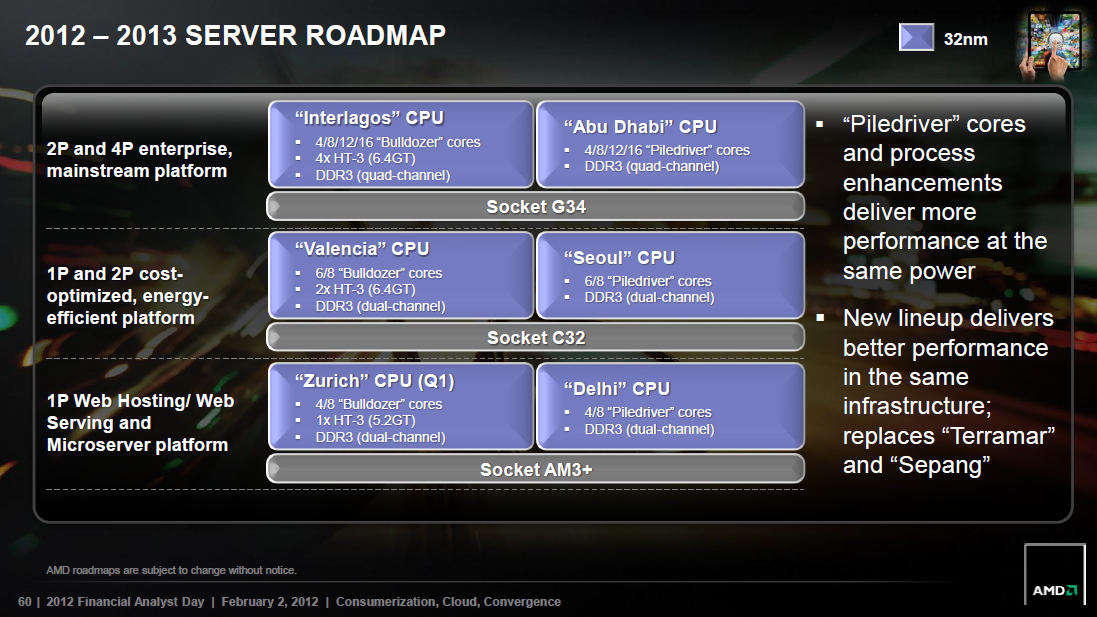 Since Komodo never happened, the same thing will not happen for Sepang and Terramer, which have been replaced by two new faces. Instead we will get Abu Dhabi to replace Interlagos and offer the same amount of cores; 4, 8, 12 and 16 sporting AMD’s new Piledriver architecture. Abu Dhabi will continue in the same socket G34, which was introduced in 2010 with Magny Cours, and support quad-channel memory. Seoul will sport 6 and 8 cores and replace Valencia. It will also use the same socket as before; C32 with dual-channel memory. Other news is Zurich for servers with only one socket that will replace Delhi. Zurich will be available shortly and target so called microservers.

The reason for the change is according to AMD due to the fact that it did not want to change its infrastructure, that is the socket. It instead promises the same performance as Sepang and Terramer would have had, but with less cores. This speaks for higher clock frequencies. There have been rumors of Komodo running into rpoblems, and that was why it was scrapped, but this is only speculations.

Abu Dhabi, Seoul and Delhi are expected to appear near the end of the year, or early 2013. What will come after that in 2014 is most likely new sockets, together with the first APUs designe for servers. This should be one or mutliple APUs with fourth generation Bulldozer core, Excavator and third generation GCN architecture for the graphics.