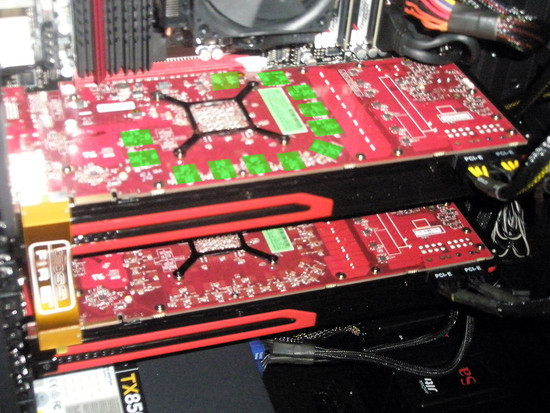 The Radeon HD 7900 series is expected to launch early next year, but the exact specifications remains clouded for the fresh Tahiti circuit. A recently leaked photo indicated it will have a wider memory bus at 384-bit.

A forum user at Beyond3D.com has published a photo of what is said to be two of AMD’s coming Radeon HD 7900 cards and even if the image is a bit blurry and we only see the back of the cards, but there are still interesting details to be spotted.

First of all the cards are relatively large, about the same cut as the current single-GPU flagship Radeon HD 6970. At the same time AMD has equipped both cards with dual PCI Express power connectors (8 + 6 pin) that can deliver up to 300 watt. The circuit board is prepared for dual 8-pins power connectors, and it looks like one big power compartment.

Last but absolutely not last we count 12 memory chips, which would imply that previous rumors were on to something, that the card has a 384-bit memory bus. This would be the first time in many years that AMD uses a memory bus larger than 256-bit.

The AMD Radeon HD 7000 series and its Southern Islands architecture will be made with 28 nanometer technology and the launch is slated for early next year. If the picture above is of AMD’s new flagship is hard to say, but even if the cards that will end up in stores will look different we have some hints of the specifications.