AMD continues to feed us with information on coming products and it has now revealed some bits and pieces on the graphics performance of the coming Fusion processors. According to AMD, Fusion will offer graphics performance on par with the current discrete graphics circuits, but perhaps not be an alternative for serious gamers.

Godfrey Cheng has posted a long entry in the company graphics blog that discusses the company’s position on the graphics card market, but also the Fusion APU (Application Processing Unit) and if the new generation of processors with integrated graphics will kill off discrete graphics circuits.

The answer is not that simply, according to Godfrey Cheng, but he points out that discrete chips have a bright future ahead of them, even if AMD’s APU circuits will be offering performance on par with some discrete solutions. There are some major differences between dedicated graphics circuits where the entire silicon and all of the transistors are facing pixel crunching tasks all day long, whereas in an APU you need room for technology that powers the rest of the computer as well (CPU and memory controller). 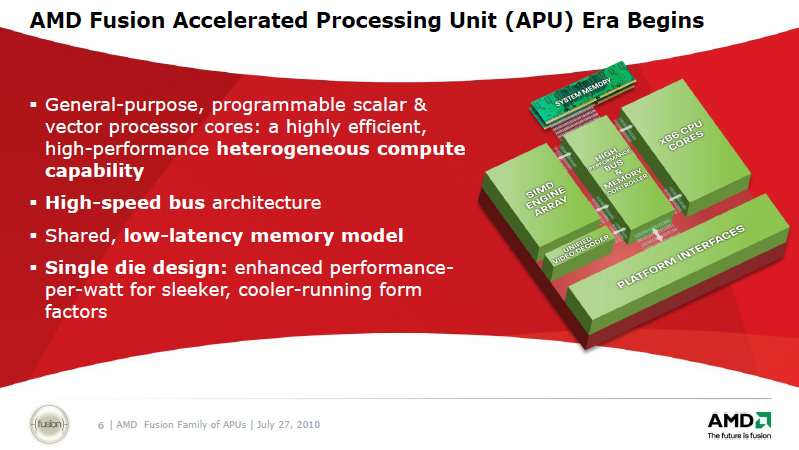 As implied by AMD during an event in London earlier this year the graphics performance of Fusion will be something out of the ordinary, but without threatening the market for discrete graphics circuits.

Even if a dedicated GPU has several times more transistors to work with and in a way can maintain higher processing power at 3D effects there are still obstacles. The PCI Express interface is the current connection to the CPU and even if the bandwidth is plenty at the moment it is just a matter of time before the interface will become a serious bottleneck, not the least with GPGPU applications that requires both bandwidth and fast access times. Something an APU won’t suffer from since CPU and GPU now share the same silicon, which really minimize access times and maximize the bandwidth.

We sincerely look forward to see which discrete chips that will be run over by AMD Fusion, but even there are advantages of an integrated graphics circuit the final pass is still that there is no chance of the discrete graphics circuits dying out completely.

At the same time AMD says that it is working on technologies that allows the integrated graphics circuits to cooperate with discrete graphics circuits. This would not only result in performance when needed, but also minimal power consumption when not needed.