AMD FX series will go up against Intel’s Sandy Bridge this fall, but the launch has been moved several times, this time to the middle of October. The positive news is that AMD is planning a broader launch than previously where the four first Bulldozer processors will be backed up by another three processors.

The new Bulldozer architecture that AMD have talked about for years now have been playing tricks and even if the manfuacturer claims that the launch of AMD FX is being dragged out for marketing reasons it is hard to believe that has been the case for each delay.

During the week we have been in contact with motherboard makers that are still waiting to hear from AMD on the new processors, which hardly is a good sign. The latest rumors are saying that AMD is officially moving the launch of Bulldozer and the first Zambezi processors to the middle of October.

At the same time the company has expanded the pluton with three new models, which means we should see seven different AMD FX processors in Q4. Among the models that will launch this years we find four octo-core models (AMD FX-81xx), one hexa-core model (AMD FX-61xx) and two quad-core models (AMD FX-41xx). 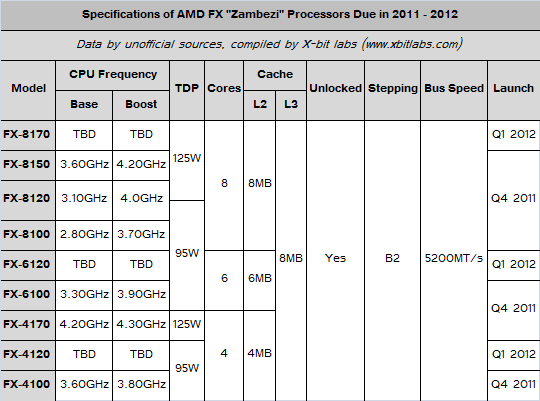 One of the more exciting models is the quad-core AMD FX-4170 that according to X-bit Labs will get a nominal frequency of 4.2 GHz – new record for a retail processor.

Despite AMD’s problems with the introduction of Bulldozer sources claim that that it is sticking to its plan of introducing more models in Q1 2011. If this is enough to gain the market shares it is looking for remains to be seen.