AMD will unleash no less than four different Phenom II X6 processors in April. The top model will be called Phenom II X6 1075T be clocked at 3.0GHz, but it is already planning even faster models where it in the Q3 will update the series with a new flagship product.

The new model is mentioned in a leaked AMD roadmap as ”Phenom II X6 10xxT” and we’re guessing that the name will be 1095T, and the clock frequency 3.2GHz, which would result in the following list;

The information is unconfirmed and still may change before Q3 it looks alright. AMD seems serious in its hexa-core venture, something we’re very happy with. 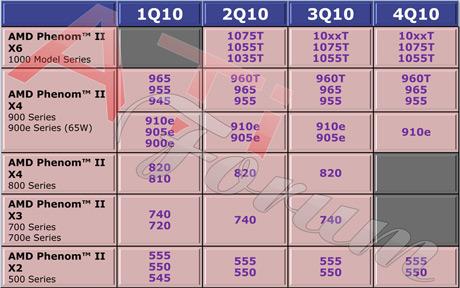