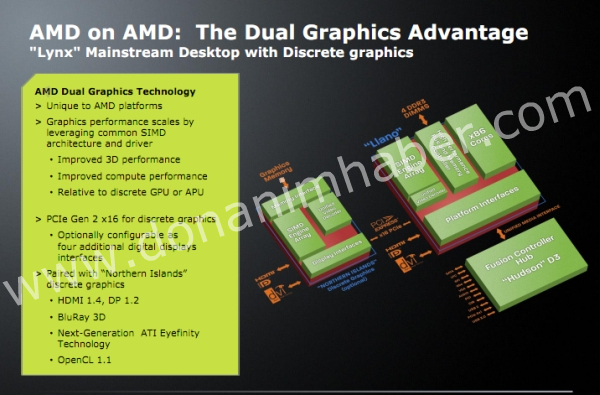 AMD has already started shipping its first Fusion APUs where it has baked in a DirectX 11 GPU into the silicon. We have speculated in the past on the advantages AMD has as a processor and graphics card manufacturer. We now have confirmation that AMD has indeed developed a technology that connects the internal graphics circuit with discrete graphics cards.

AMD will with the Lynx platform launch a new mid-range processor, AMD Llano APU. We have already seen how these processors will offer graphics performance on par with Radeon HD 5600 series and the good news is that this power will also come into good use for those with a discrete AMD graphics card.

In a product presentation that was published at Donanimhaber AMD calls its technology for Dual Graphics Technology. The technology enables AMD’s Lynx platform to connect the integrated graphics circuit with a discrete graphics card from the Radeon HD 6000 series. This way you will only improve performance through a form of Hybrid CrossFire but also make use of up to four extra digital outputs.

This is a technology that we more or less predicted that AMD will introduce when it launched its Fusion APU family, but it will be extra exciting to see how well it has optimized the Dual Graphics Technology since this will be a big trump over both Intel and NVIDIA, since none of AMD’s competitors has both processors and discrete graphics cards to offer.

AMD is expected to launch the Lynx platform and Llano APU in June or July and the processors will get får 2-4 cores based on the Stars architecture and a DirectX 11 graphics processor that will be able to communicate with all cards of the Radeon HD 6000 series.