AMD’s whole new architecture Bulldozer looks to be coming now, after a very long wait. During Hot Chips held August 17-19th AMD discussed the Bulldozer architecture for the second time and with AMD engineers present it came up that Bulldozer is finally coming.

Delays and speculations, not the least about Bulldozer, have been a tot topic during the summer, but now the launch is closer than ever. According to sources at Hot Chips Bulldozer will start shipping the coming week, and there are rumors that AMD’s closest partners already has the processor in hand. Bulldozer will be AMD’s most important architecture in a long time, it is first all new architecture since the launch of K7, 1999.

A lot has happened during Bulldozer’s lifetime, even if it is still not on the market. The first design was built for 45nm and sport eight individual cores, but it had to go since it would not be competitive. Instead it had to start working on an already existing architecture, the one found in Athlon II and Phenom II series. It went back to the drawing board and came up with something new, which became AMD’s discussed module design. It has two cores that shares the resources of one module, where one can use a lot of the resources of if the second core is idle. 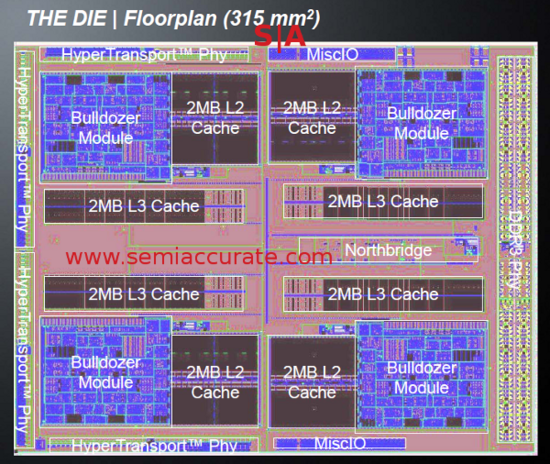 AMD Bulldozer with eight cores takes up 315 mm², not the biggest but one of the bigger we’ve seen.

According to AMD this will be a compromise seen both to the circuit space and performance, since two Bulldozer cores in the current design only needs 12% more circuit space than a single core had done in a non-module based architecture. Performance will suffer though, compared to a single-core design each core of the module has 90% of its performance when using shared resources. AMD says that this version of Bulldozer will offer a lot better performance in relation to its circuit space, but lower power consumption, which sounds good in theory. The big question is what the practical result will be.

The first version of Bulldozer before AMD decided to rethink altogether.

That Bulldozer starts shipping next week means that the majority of AMD’s OEM partners will get access to the circuit, and that the distribution channels are prepared for launch. It is not wrong to assume that the launch will happen in the middle or late of September.