Almost half of all PCs gets integrated graphics in 2011

Intel has despite a rough start gotten an overall warm reception for its new microarchitecture Sandy Bridge. The new powerful processors also sport an integrated graphics processor that is a lot more capable than previous generations, which has made Apple abandon discrete graphics with its notebooks.

AMD has with the ultramobile Brazos platform launched the first microprocessor with a DirectX 11 graphics and it has plans to expand its Fusion APU family later this year. The mid-range family Llano will launch in July and take the DirectX 11 architecture to desktops.

According to analysts at iSuppli this development will manifest itself in the PC sales. It chooses to call the new generationen microprocessors for GEMs (Graphics-Enabled Microprocessors) and says that these will appear in 50% fo all notebooks sold in 2011, and 45% of all desktops. The latter is an increase by 9 percentages from last year. 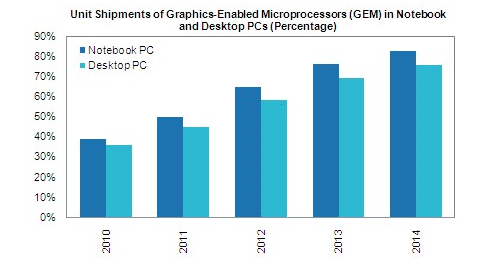 With approximately 230 million shipped notebooks in 2011 there is a significant amount of GEMs that is expected to ship, The development will continue and in 2014 the same number will be 83% for notebooks and 76% for desktops.

The numbers may seem overwhelming for the discrete graphics card market, but they don’t take into consideration if the system has a discrete card or not.