Acer Predator AG7750-U2222 is a desktop gaming PC that doesn’t seem to leave anything to chance. The performance machines comes with a water-cooled Intel Core i7 930 CPU and three GeForce GTX 470 graphics cards in 3-way SLI.

Acer Predator uses the same industrial design that we’ve become accustomed to from Acer, with a black/orange theme.

The look hints of the capacity of the components found inside. Beside a powerful CPU and a bunch of graphics cards there is room for four 3.5″ harddrives, swappable through the front of the case. And up to 12GB DDR3-RAM.

Opening the case reveals the inner power of the Predator, including striking and highly dynamic mechanical elements and cool lighting effects, such as claw-like optical disk drive doors, easy-swap HDDs and red LED lighting. An illuminated door on the lower front of the chassis provides quick entry to the hard disks, simplifying upgrades.

Buyers can add a 3D-capable monitor to the package since both Acer GD245HQ and GD235HZ supports NVIDIA 3D Vision.

prices start at around 2000€, but that doesn’t get you any monitor and only one GeForce GTX 470. 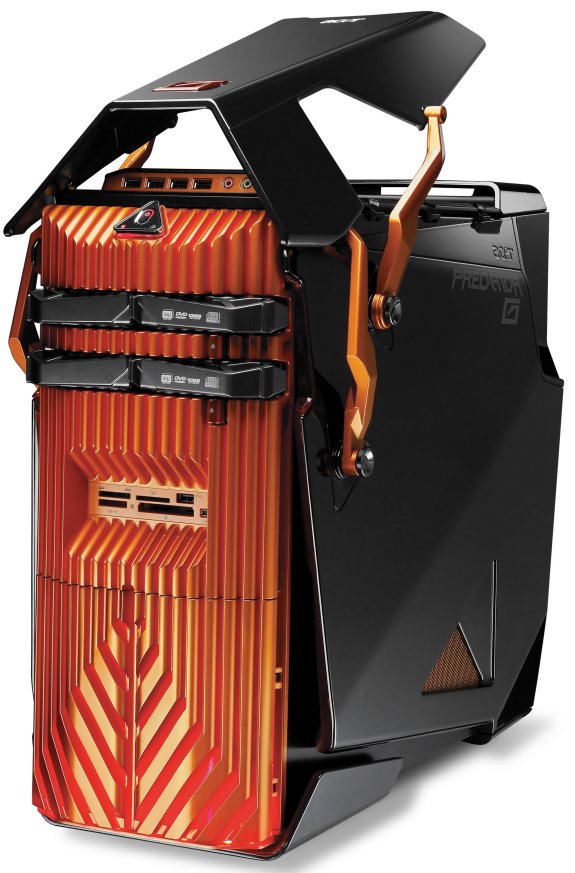