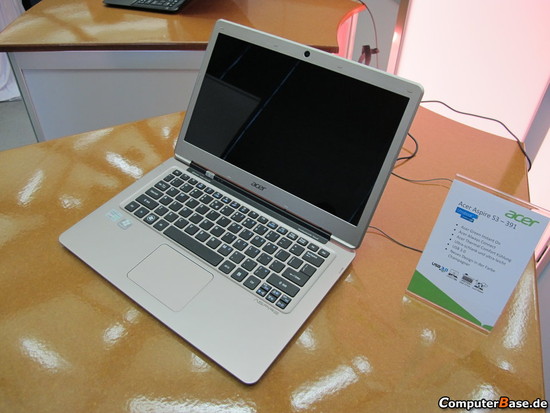 Acer Aspire S3 was actually the first real Ultrabook and was as the concept promised really thin and still relatively powerful. Acer has now started talking about the successor called Aspire S3-391, which will sport Ivy Bridge processor and USB 3.0 ports.

Acer Aspire S3 made a visit in the test lab earlier this Winter and turned out to be a relatively cheap machine, but didn’t quite make it all the way through. The thin and slim formfactor lacked USB 3.0 ports, had meager graphics performance and a poor screen.

Acer has corrected at least two of the three in Aspire S3 with the 391 model by installing a more powerful Ivy Bridge processor – 20-55% better graphics performance says early tests  – and USB 3.0 ports. According to German site ComputerBase.de the new processor Aspire S3 has a quicker feel and if Acer has also revised the screen with the new S3 it could be a real hit when it comes Q2 with price around 900€.